Islay is famous for its peated whiskies. In La Maison du Whisky Store, there is an entire roomdedicated to Islay bottlings. New ones as old and rare ones.

Discover the Kilchoman Fresh Oloroso tasting by Anthony Wills, founder of Kilchoman, and his sons

Discover the Berry Bros and Rudd shop in London

Connoisseurs Choice indisputably commands respect. And for good reason. It was one of the first, in 1968, to bottle single malts. We take a look back at 50 years of history with Steven Cameron, formerly of La Maison du Whisky and today brand ambassador for Gordon & MacPhail.

LMDW : Gordon & MacPhail has been around since 1895. What did it do before it bottled single malts?

STEVEN CAMERON: Gordon & MacPhail was originally a delicatessen that sold lots of different products, like cured meats, cheese, coffee, tea and wine. As was the custom for most wine sellers at the time, G&M also produced a variety of blends. The delicatessen is still going and Elgin locals still buy their cheese here!

LMDW: Created in 1968, the Connoisseurs Choice range was a pioneering initiative in the bottling of single malts. Who was George Urquhart?

SC: George Urquhart, or ‘Mr George’ as he was known here, was a member of the second generation of the Urquhart family which had run Gordon & MacPhail since 1915. He joined the business in 1933 to work alongside his father, John Urquhart. During his apprenticeship, George U. became very interested in the art of maturation and understanding the interaction between the spirit and the cask. A keen defender of single malts, he played a vital role in the development of their popularity in an era in which blended scotches were the norm.

LMDW: The Distillery Labels range already existed at the time. What did the Connoisseurs Choice range bring to the table?

SC: The Distillery Labels were licensed bottlings produced with the permission of the owners of these distilleries, who approved and sometimes even provided the labels. This meant that Gordon & MacPhail’s bottlings were almost official versions, as the distilleries did not themselves bottle any single malts. When it was created in 1968, Connoiseurs Choice focused on other distilleries sporadically releasing single malts.

LMDW: Gordon & MacPhail stood out from other bottlers by aging new-make spirit in its own casks. Can you tell us more about this practice? 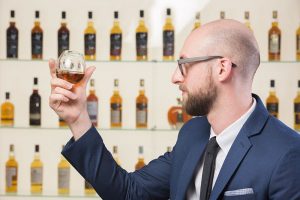 SC: This is something G&M has always done, and today almost all of our casks are filled specially for us. Of course, these contracts have changed a lot since 1895, as properties have changed hands and the industry has developed, and although we now bottle from more distilleries than in the past, we still find a way to acquire more casks every year.

LMDW: How does Gordon & MacPhail still have access to more renowned closed distilleries than any other independent bottler?

SC: Thanks to the approach taken by the Urquhart family since it took over in 1915, our warehouses still contain casks from many distilleries that are now closed, which we continue to bottle from time to time. This year, for example, we revealed single malts from the Coleburn, Caperdonich and Dallas Dhu distilleries. Who knows what next year holds in store? Moreover, thanks to our long-dating, strong relationships, we are lucky enough to be one of the only independent bottles authorized to fill casks from certain distilleries and use their name on the label.

LMDW: What makes the bottlings from the Connoisseurs Choice range different from G&M’s other ranges today?

SC: We are very proud of the Connoissuers Choice range as, through its heritage, it represents the family’s devotion to single malts over four generations. Most of the bottlings in the range are now single casks, which allows us to really highlight our work to select casks based on the distillery’s character for each whisky. As is implied by the name, this range is aimed primarily at connoisseurs, who will be able to explore the aromatic profiles of a wide variety of distilleries in a range of vintages and cask types. The focus is really on the individuality of each cask and blend, rather than the consistency sought for the Distillery Label bottlings.

LMDW: What are the main expressions that have helped build the reputation of the Connoisseurs Choice range?

SC: Many of them were amongst the first bottlings produced, such as Talisker, Glendronach and Oban, all distilled in the 1950s. Though it might seem strange today, remember that these distilleries were little known at the time! You’ll also have heard of a series of Ardbeg 1974 bottled in the 1990s. All of these bottlings are now highly sought-after and sell for huge sums at auctions.

LMDW: Do you have a personal favourite in the range, old or new? 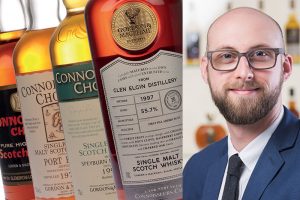 SC: We recently released a Brackla 1995 (refill sherry butt, 50.6%) which I think is absolutely stunning! It shows a perfect example of balance between the distillery’s fresh, herbaceous character and the subtle influence of the sherry butt. Neither dominates, and, for me, both find the perfect balance.

LMDW: The Connoisseurs choice range has changed a lot over 50 years. What were the major developments and what are the unalterable foundations that have remained since its creation?

SC: For a start, the design has gone through lots of different phases (“black labels”, “brown labels”, “map labels”, etc.). We have also moved from small batch bottling at 40% to 43%, then 46% and finally primarily cask strength single casks. Last year we also incorporated our wine cask finishes into the range. Lots of things have changed, really, but the quality has remained the same since 1968.

LMDW: When it was first created, the Connoisseurs Choice range was revolutionary. Today it is a classic. How do you maintain its innovative style 50 years on?

SC: By always adapting to market expectations. For a long time we were criticized by some enthusiasts for our 40% bottlings, which were said to “age badly” due to their low ABV. Completely updating the range last year was a huge turning point for us, with a deliberate transition to cask strength bottlings at a minimum degree of 45%, which was a very welcome move for many.

LMDW: This year, La Maison du Whisky has selected two Islay expressions, a Caol Ila 14 Year Old 2004 and a Bunnahabhain 30 Year Old 1989. Tell us a little about them and how they represent the range…

SC: I think they are both perfect reflections of our expertise in whisky maturation. The Caol Ila 2004 has been aged in a refill sherry hogshead, which gives it a wonderful richness without it being dominated by the peat. The Bunnahabhain 1989 (refill hogshead) is full of exotic fruit, with a hint of beeswax. It’s an absolute delight!

LMDW: Today, independent bottler ranges seem to be mostly designed for connoisseurs. What needs to be done to make them more popular with less expert enthusiasts?

SC: That was definitely the case for a long time but things are changing. For example, last year we launched the Discovery range. With the aim of creating more accessible and readily understandable single malts, the range is divided into three categories, bourbon maturation, sherry maturation and peated. They can be easily identified by their colour code, so enthusiasts can navigate through and try a variety of distilleries at a more accessible price.

Discover the exclusive interview of Sukhinder Singh, founder of The Whisky Exchange

Discover the visit of the Signatory Vintage warehouse in Pitlochry, Scottland

Unique as the shop